How to tag a game

Written by Danny Turley
Updated over a week ago

1. To tag a game tap on the "Start Game" button along the top of the screen which is located between the two team names. This will start the timer. 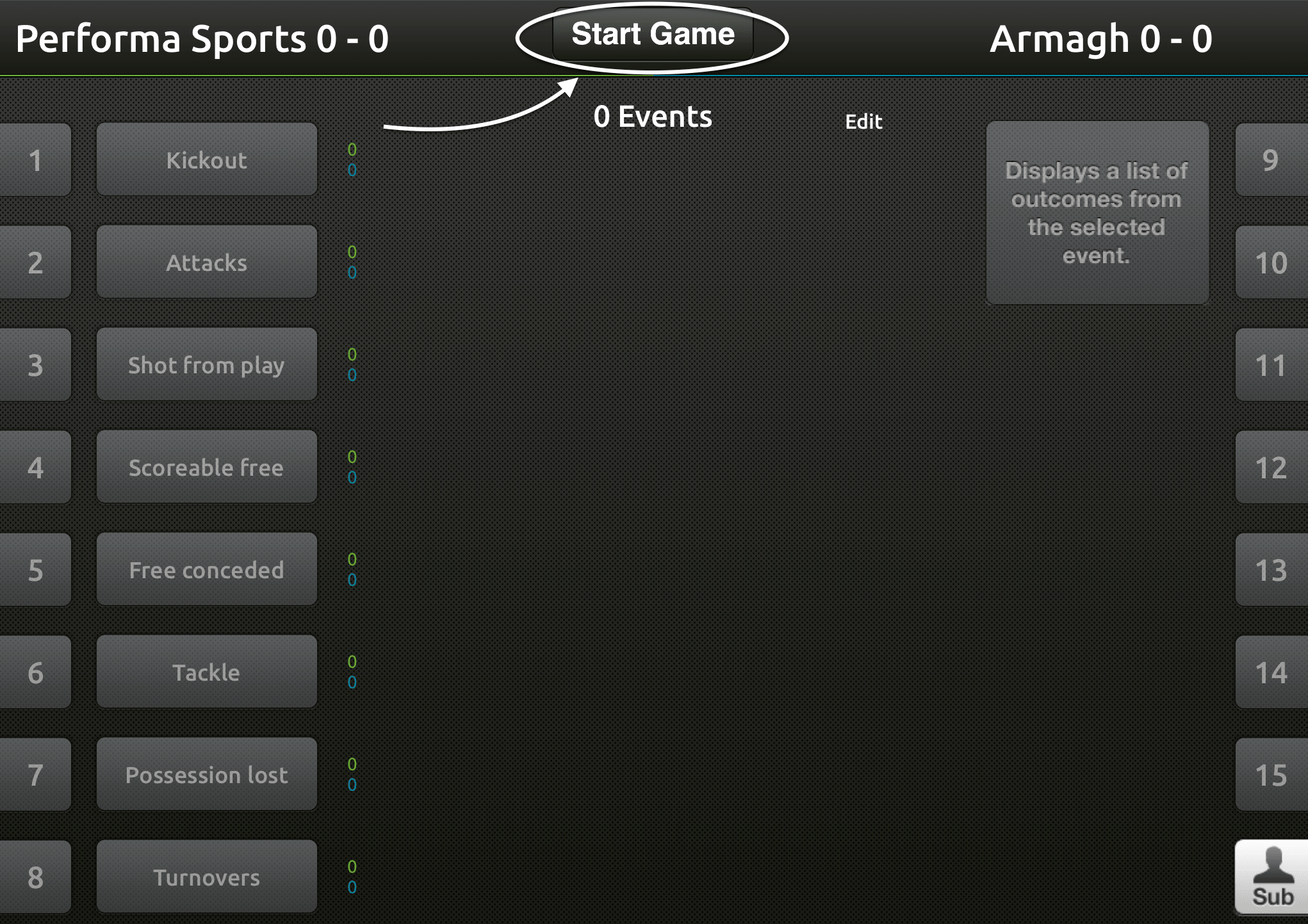 2. Hold the iPad so that your two thumbs are free to tap on the buttons along both sides of the screen.

3. Using your left thumb tap on the events as they happen.

4. Single tap for your own team and the event will turn green. Once an event is selected, the outcomes will appear on the right hand side of the screen. Use your right thumb to tap on the outcome as it happens. 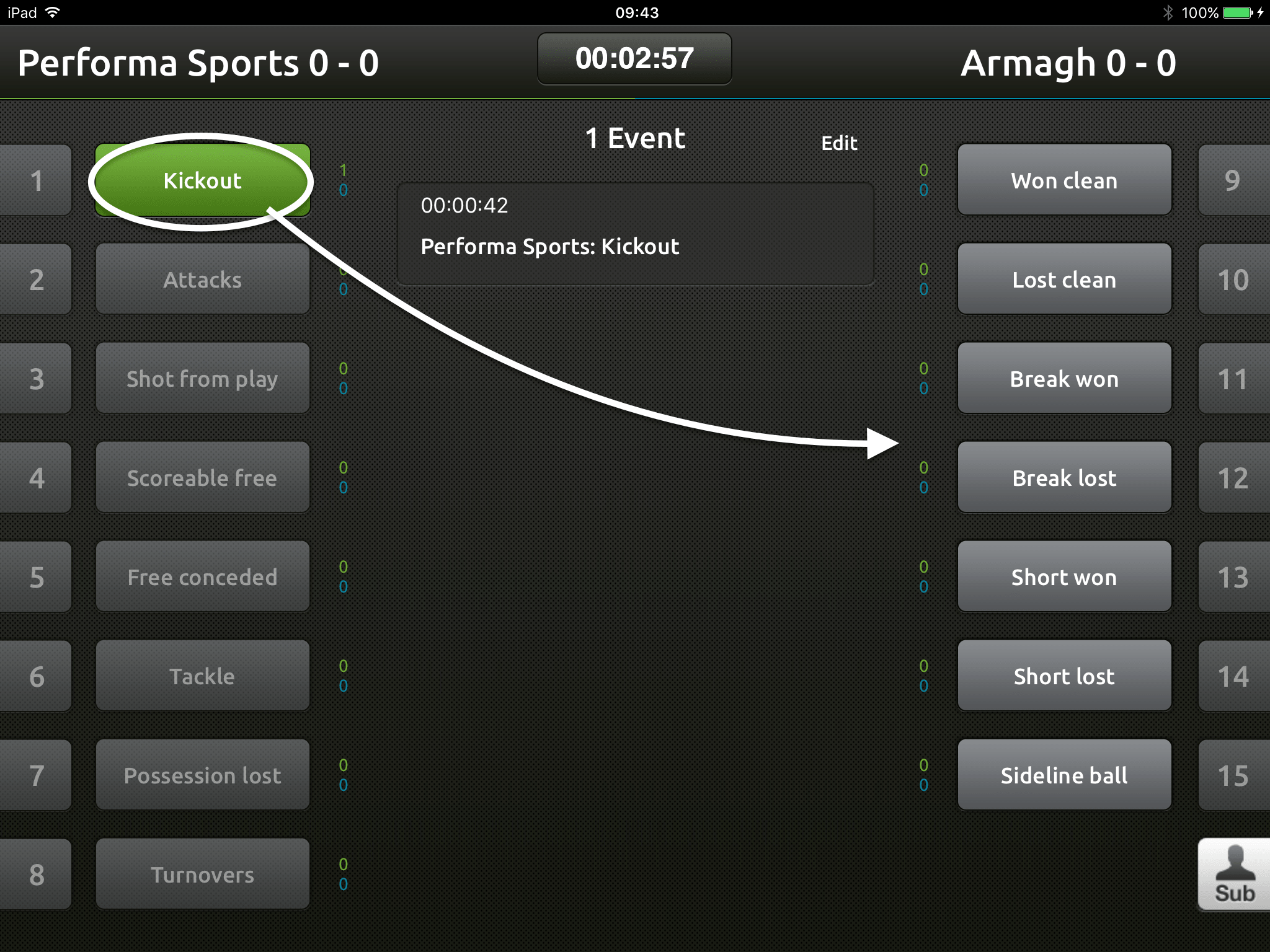 5. Double tap an event to track the oppositions events. The event will turn blue. The outcomes will appear on the right hand side once selected. 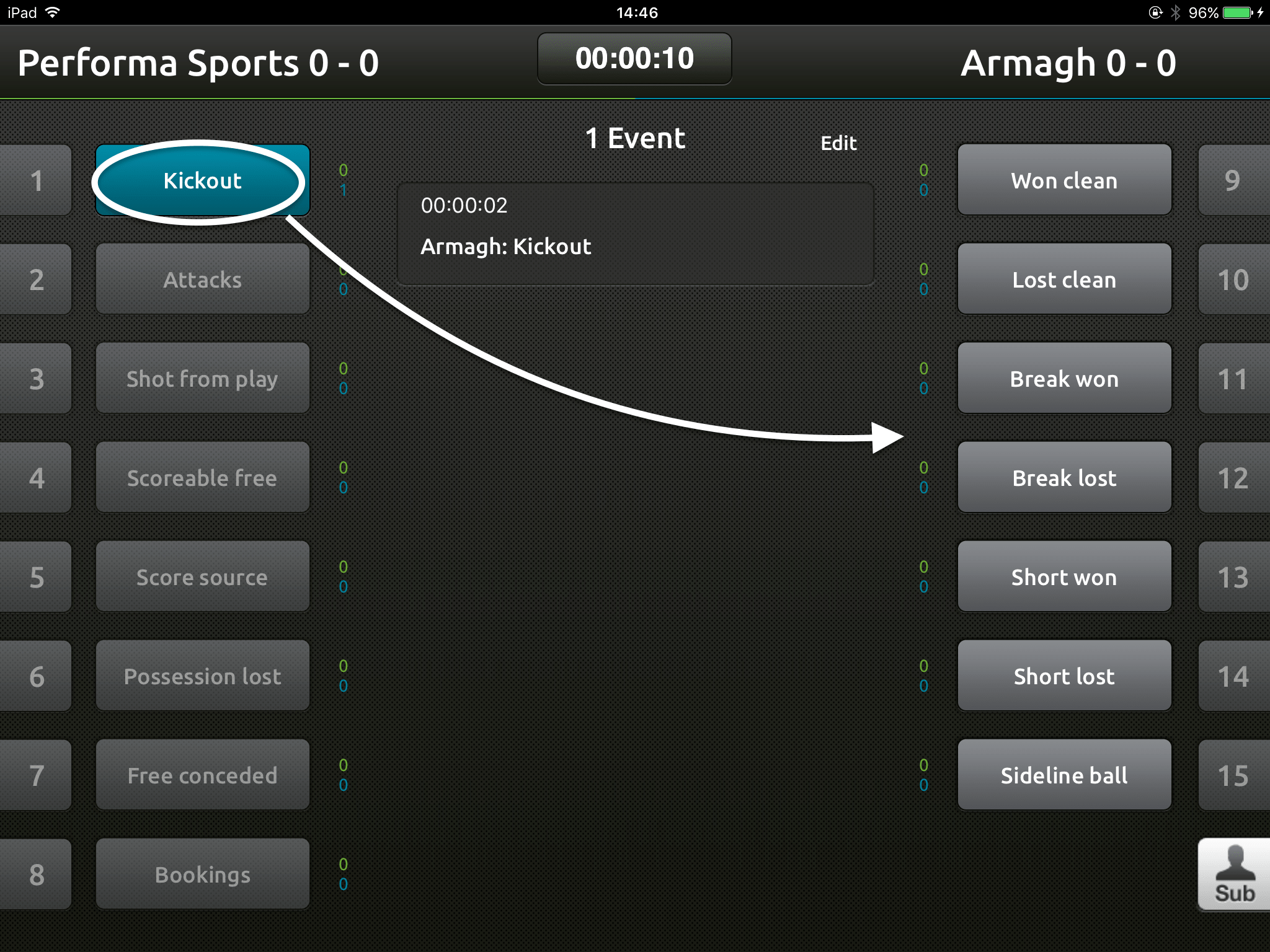 6. Then tap the player number that the outcome belongs to by using either thumb depending on the location of the number on the screen. As each event is tracked they will appear in the middle of the screen in order of when they were tracked as each event is timestamped. 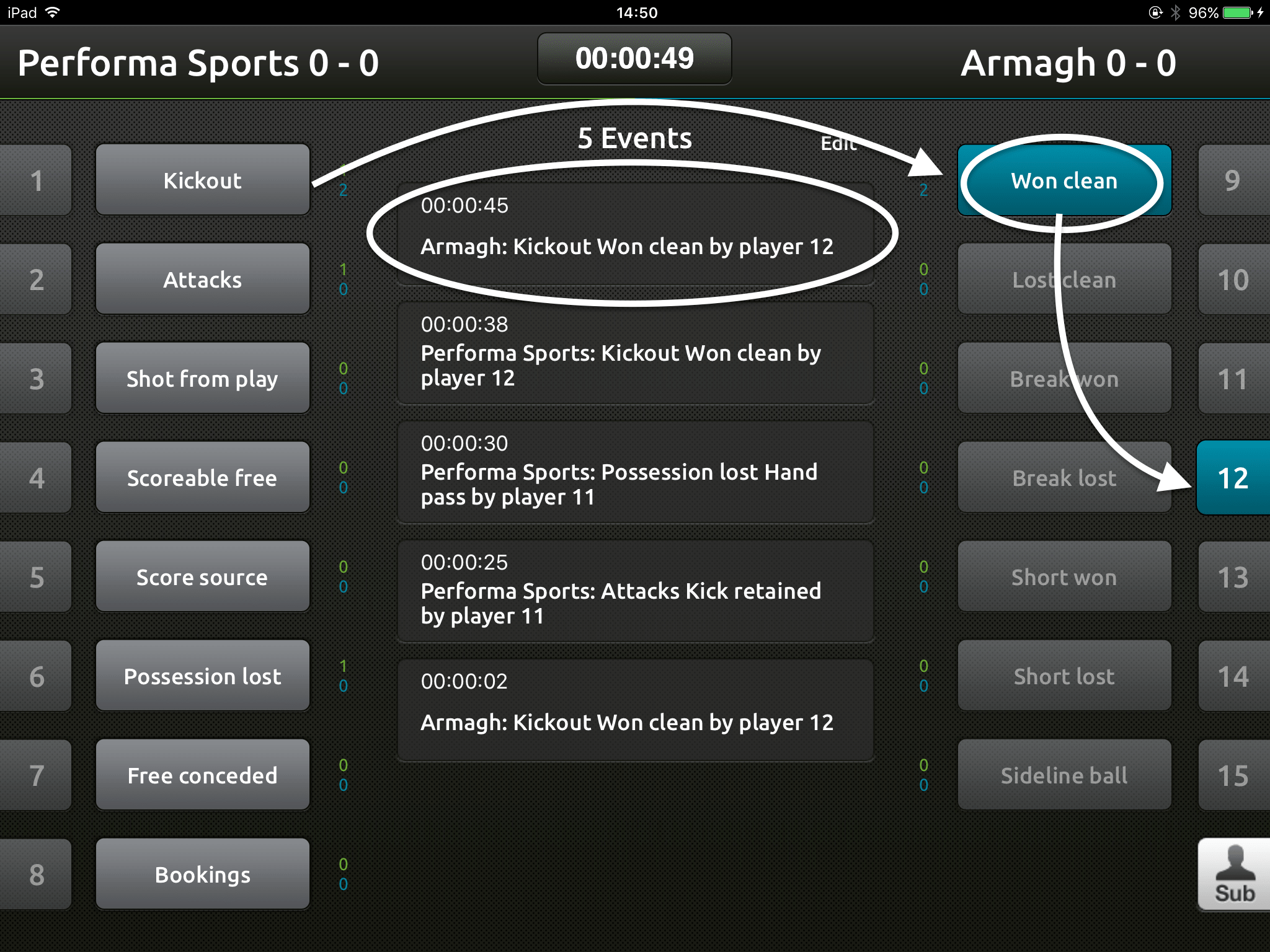 7. At any point a mistake is made or you would like to edit an event, tap on the “Edit” button which is located above the list of timestamped events along the middle of the screen. 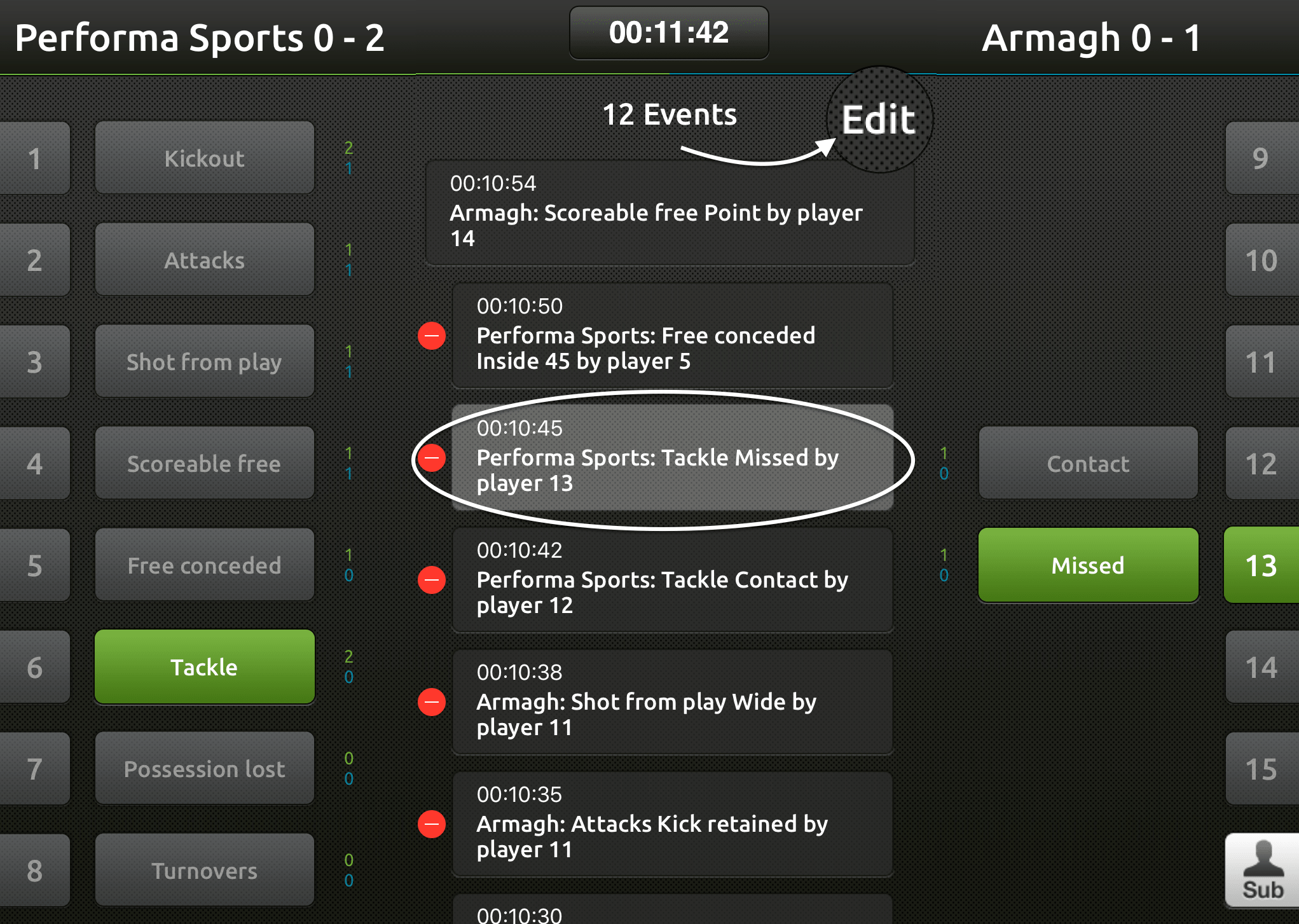 8. Once selected you can tap any event that has been tracked by simply scrolling down the list. In order to begin tagging again you must tap on the “Done” button where the Edit button previously appeared. 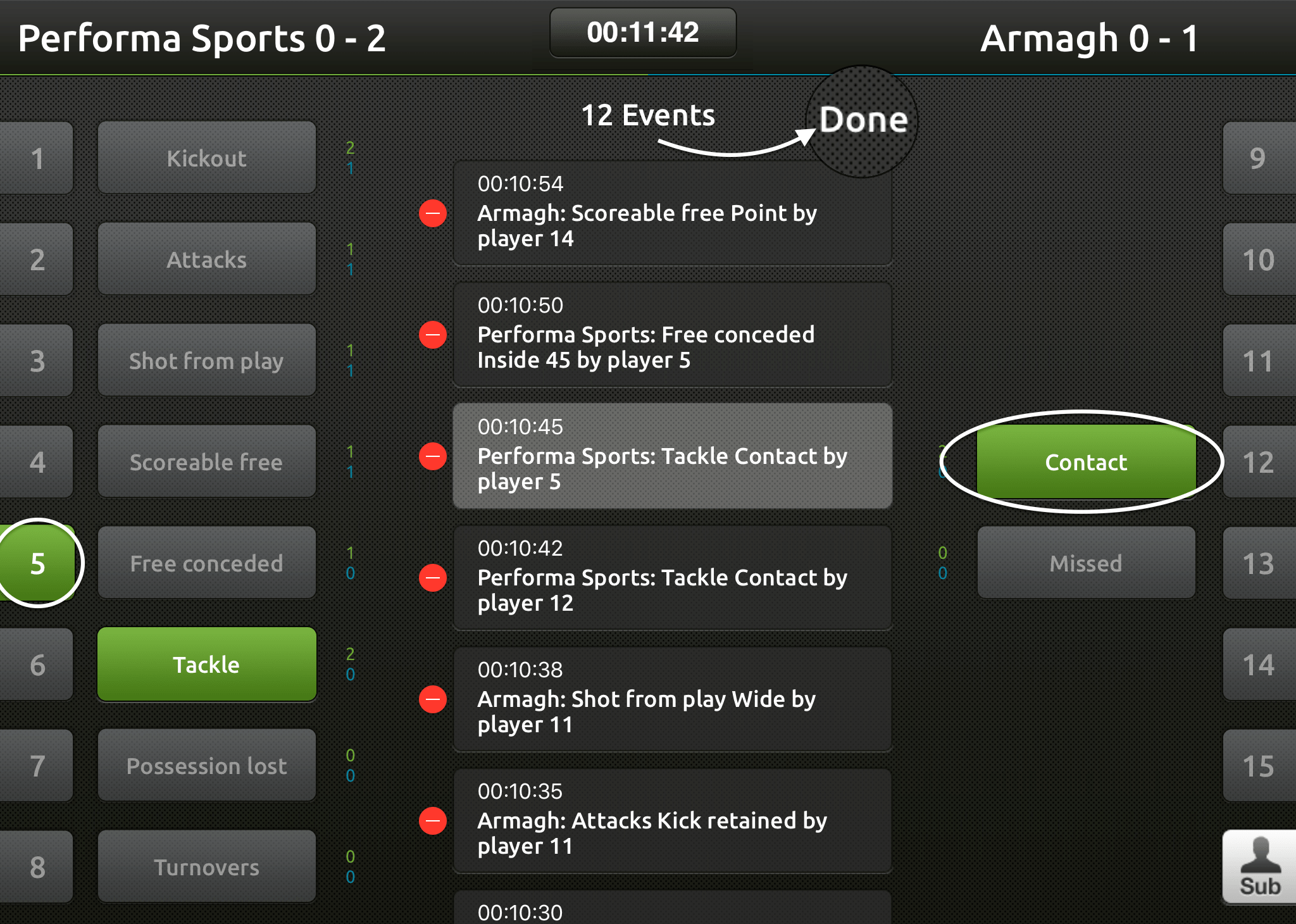 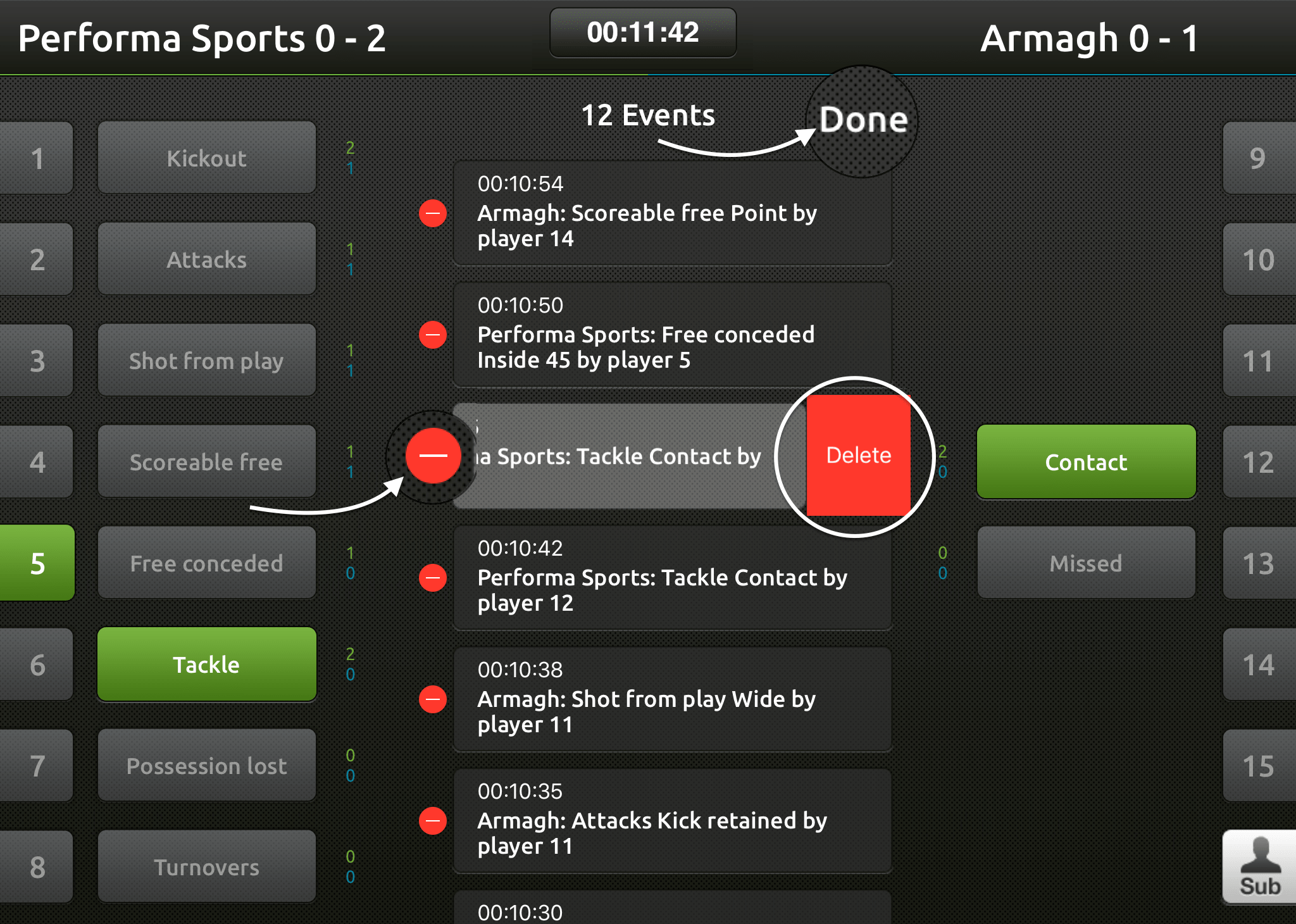 10. At any point you can review the statistics that have been tracked. To do this tap on the timer along the top of the screen. This brings a menu of four options. Select “Review” to view your statistics. 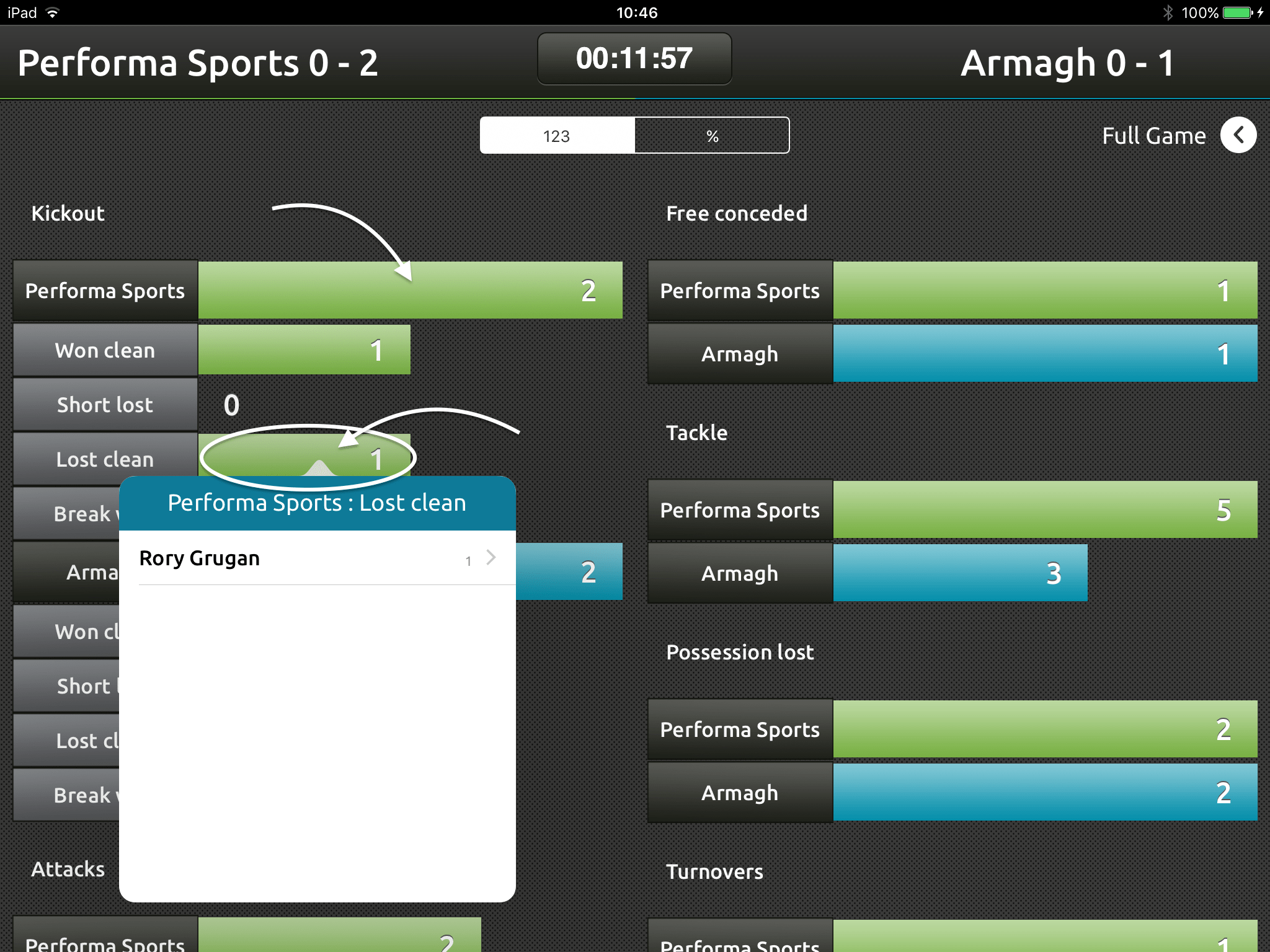 12. These can be presented in numbers or percentages. This can be changed by tapping on either the icon “123” of “%” which is located directly below the timer at the top of the screen. 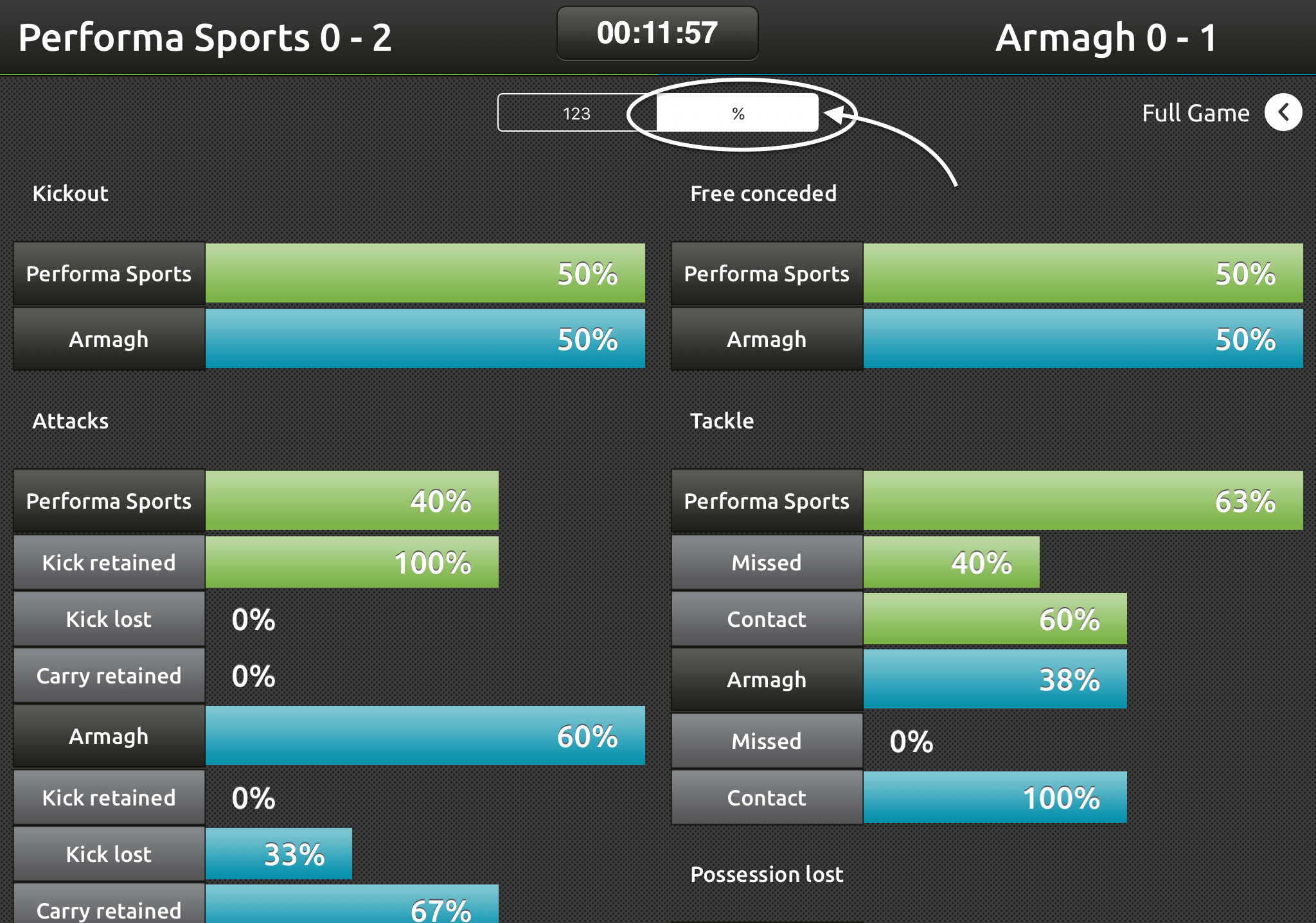 13. If you are viewing the statistics during the second half, you can filter the events by game interval. This is done by tapping on the word “Full Game” which is located just below the oppositions team name. Then tap on the desired game interval.

14. To exit to graph view and return to the live tagging screen, tap on the timer at the top of the screen and select “Back to game”.

16. This will bring you to the graph view to view the stats from the first half.

17. To begin the second half tap on the timer and select “Start 2nd Half”.

18. To make a substitute tap on the “Sub” icon on the bottom right corner of the screen then select the number of the player coming off. A panel of the players on the bench will appear and simply scroll down to the desired player and tap "Done". When you have no more substitutes to make tap on the “Sub” button again which will take you into the live tagging view again. 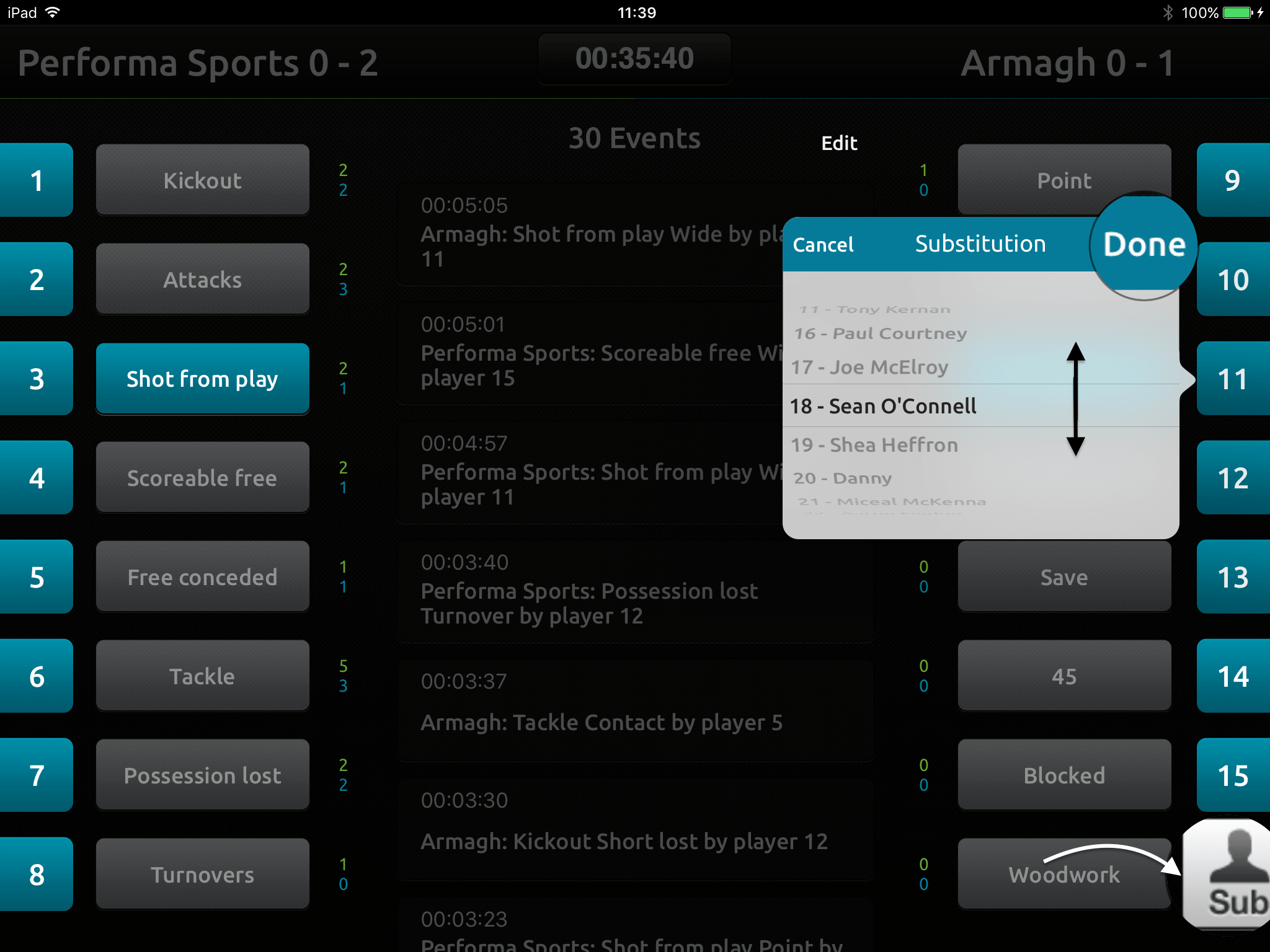 20. To exit the graph view tap on the timer and select "Save and Exit".

Note: at any point if you select “Home” from the drop down menu during live game, simply tap on the game that you were live tagging on the left hand side of the screen. Then tap on "Video" which is found along the top of the screen. Once selected, tap on the action button in the top right corner. This will give you the option to "Resume Game". This will then bring you back to the live tagging screen.

Warning: be careful not to tap “End Game” as this will end the game and you will have to create a new game in order to track the stats for the remainder of the game.

Did this answer your question?